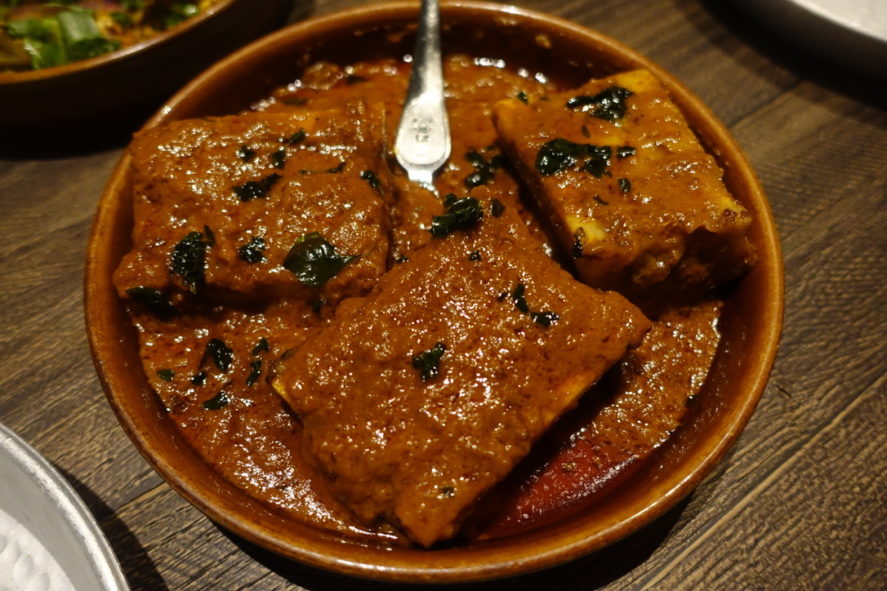 Hoppers is a Soho success story with a not so secret weapon of serving up bowl shaped pancakes made from fermented rice batter and coconut milk. You get an array of thickly sauced, big boned kari’s (curries), full of vigour and punch that will make you want to run your hoppers around the rim of curry clad bowls to get every last drop. Their schtick has firmly put little-known Tamil cuisine onto our plates in London. So why wouldn’t they open a two floor, 85 seat restaurant in Marylebone off th back of their Soho success? Expect slick service, al fresco dining and a choice to book too which the Soho stalwart doesn’t have. The innards are inspired by a modernist Sri Lankan landscape, whatever that is and they’ve been doing their thing since September 2017.

This is the booth in where we dined, away from the bustle.

In Tamil fashion, the cashew and nut peanut fry £3.50, comes with a thick dusting of roasted spices that hits the back of your throat like a freight train.

That’s the same for the shrimp chips £3.50 too with a spicy chutney for dipping. The intense clout of spice is a taste of what’s to come throughout the meal.

We lubricate with a selection of their expertly done cocktails from the Arrack Attack £9.50, One Pot Sour £10.50 and Pina Pol-ada £9. We’re talking hoity-toity cocktail bar prices, but arguably something that’s not quite at that level.

We start with their chicken wing chukka £6.50, the drums from the wing get a slow braise until all of the spices cling on for dear life. The flesh falls of the bone and fiery aromatics taste grown-up and give the tongue a rude awakening.

The mutton roles with SL hot sauce £5 are a riot to eat too. What you get are crispy fingers the size of a builder’s middle digit filled with dry spiced intense mince.

Hot butter devilled chipirones £7.50 are crispy snacks of baby squid, they get a spiced batter that seems bad for you but bad tastes irresistible here.

Spring hopper seafood kothu £12.50 is a big bowl of chopped things such as spring onions, coriander, noodles, tomatoes and of course spices. It comes with a spiced soft shell crab that is deep fried to the point of being crinkled and crispy. The dish is a meal in itself.

The roti’s £2 are buttery, crisp and flakey which are great for the bone marrow to come.

Bone marrow varuval £7 are an act of hip sticking deliciousness. Hunks of sawn-up bone are disguised in punchy viscous sauce that tastes like hours of slow cooking. The jiggly bone marrow is made for roti-scooping. As nice as it was, from what I can remember, the Soho versions were more deeply flavoured.

Jaffna beef rib fry £9 were a slow braise bandsaw’d short ribs cooked in spices that makes itself known with a ripe kick of fire.

The black pork ribs £16.50 come with a mountain of cashews and fennel sambal. It’s heady with turmeric and other spices. I found this one too robustly-spiced though, it’s fragrancy was too overpowering and a lot of it was left.

Then came ALL of the sambols and chutneys. There was pol sambol £1.50, seeni sambol £1.50, tomato chutney £1.50, coconut chutney £1.50, coriander chutney 1.50, brinjal moju £2 and finally beet and kale sambol £4. Our waitress, as sweet as she was, clearly had no concept of portion control and multiplied everything twice for us, in spite of our mammoth order already.

We didn’t mind her getting us multiple egg hoppers though (£4.50 each), as they are crispy edged pancakes sent from the Sri Lankan food gods.

Prawn kari £9.50 was a fire coloured and fire flavoured pot of goodness. But we felt massively short-changed on this one, I mean it was 50 pence shy of a tenner and we only got three prawns. The thought of paying for it distressed me so after raising it to our waitress she brought over more. Considering how full we felt at the time, I’m not sure whether it was a good or bad idea!

The crab kari £15 was another seafood delight with juggernaut levels of spice in thick coconut laden sauce. By this time I had given up from being too overtly full, all I could muster was a quick hoover of the low hanging bits of flesh. I usually winkle out every morsel.

Finally came the Jaffna lamb chops £20. No dish is complete if it doesn’t get a pelting of complex spices here, these chops were no exception except that they were anaemic by comparison to what could be had elsewhere, take Gunpowder’s as fine examples.

When did I go? Nov 2017
The damage: Expect to pay £45/55 per head with drinks
The good: There’s so much to come here for at the larger buzzy venue, take the chicken wing chukka, chipirones, spring hoppers seafood and bone marrow varuval, not to mention the namesake hoppers which are brilliant. The aforementioned makes the ring sting worth it. You can also book too at this venue too unlike the Soho branch.
The bad: What immediately springs to mind is our waitress’s profound mission to over-feed us. I couldn’t help but to think that she was on the up-sell with no notion of how much our bellies could actually fit and that’s coming from me, the greedy human hoover with the bottomless belly. I would suggest getting a dosa or hopper each with one of their “short eats” and a kari per a person and see how you feel before pulling the trigger on more food.
Rating: 3.5/5
Would I go again? You don’t need to ask me twice!
Address: 77 Wigmore St, Marylebone, London W1U 1QE
Web: https://www.hopperslondon.com/locations/st-christophers-place