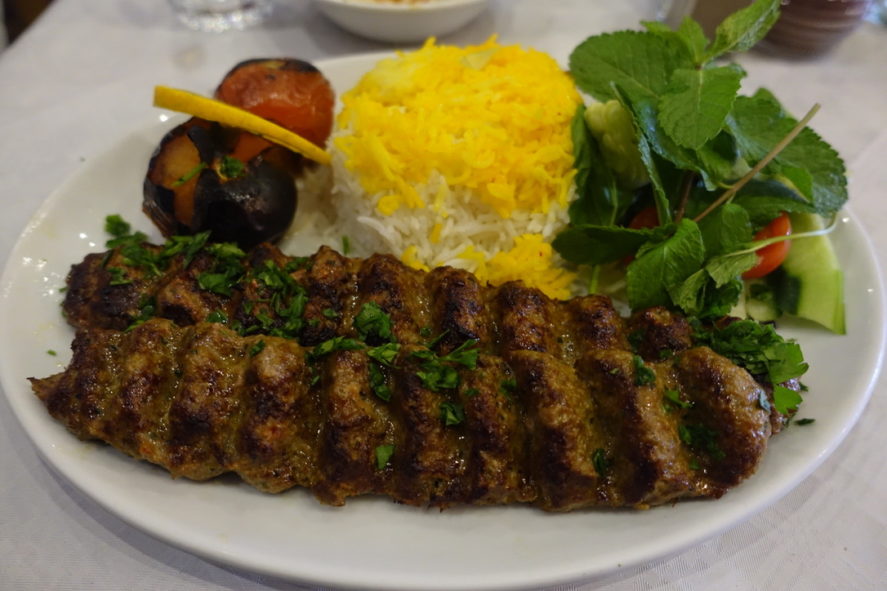 There’s only a handful of choice in the neighbourhood of Kensington Olympia, the mecca-venue for events. What I saw was a parade of Persian eateries sandwiched between a block of red bricked Victorian flats and new builds directly opposite the venue; there is a token boozer there too along with a curry house. Yas is bang smack in the middle of the parade and was the one that stood out to us after a morning of mingling with inescapable geeks chatting about the hyper-connected future for immersive virtual reality and the endless opportunities it has for porn – as you do. Inside you get chipper red walls peppered with random acts of art, mostly of men in head scarves and sunflowers. There’s old-school white table clothes and chestnut floor tiles that stood the test of time since since 1974 – the year the restaurant was born. They’ve got their own bread oven too, and you all know I love the stuff – more on that in a bit.

Here’s their houmous £5.50 that they’ve been making from scratch since 1975 as advertised, and so they should!

We use their homemade freshly baked nan-e lavash bread £3 to dredge. They arrive hot and blistered from the oven and are made for scooping up the houmous. They have a rewarding chew and bubbling crispness about them that made eye-up piece after piece.

Then we got the marinated wings £7.50 that were charred, crisp and caramelised in all of the right places. The cartilage popped and snapped as we tore them apart with our fingers and gnawed the flesh that had the right amount of texture and tension.

We go for the fork tender kebab-e koobideh £13, two skewers of melting herby minced lamb with roasted spices cooked over the coals. There’s a garnish of token mint, roasted tomatoes and cucumber to brighten things up. The two toned rice was all about fluff, steam and butteriness.

When did I go? Nov 2017
The damage: Expect to pay £25/30 per head with drinks
The good: What we got was a solid, well priced food after the VR show at the Kensington Olympia and they sure know how to feed here. Everything tasted that it had some love put into it and they could go on for another 40-odd years without blinking an eye lid. Our waiter was chipper and entertaining too. They do the simple things blissfully well.
The bad: Not a lot for the price.
Rating: 3.5/5
Would I go again? If in there area, yeah!
Address: 7 Hammersmith Rd, Hammersmith, London W14 8XJ
Web: They don’t have one!