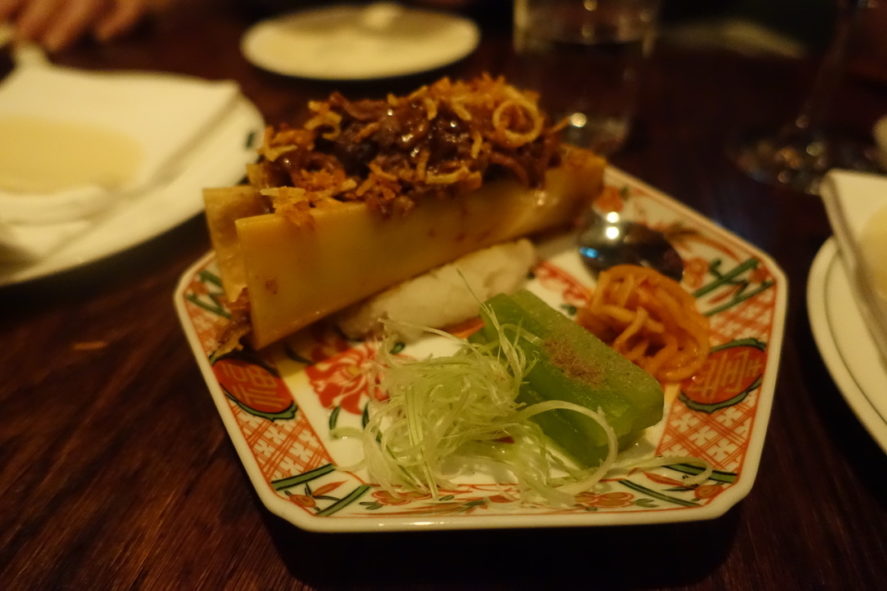 The Sethi family behind the JKS Group have knocked out yet another whopper called Xu (pronounced Zoo) on Rupert St, the Piccadilly end of Soho. Eating here was like seeking wisdom in a counsel that’s a nod to modern Taiwanese fare, the restaurant makes its noise by giving us things with huge wallops of umami since the summer of 2017. The venue is split across two floors; there’s a cocktail bar, a tea tasting bar that endorses traditional tea making methods and is a demonstration that there is world outside of Tetleys. The design is enlivened with cues of 1930’s Taiwan, designer Brady Williams described it as ‘a reinterpretation of a stylised cinematic stage set of Taipei in the 1930s.’ Whatever that means, come and see for yourself. The food is created from the guys behind Bao – sister and brother Wai Ting Chung and Shing Tat Chung, and Shing’s wife, Erchen Chang. They have done lustful things with a Taiwanese accent, enhanced with Cantonese sensibilities.

Then we got the beef tendon £5.50 rolled into a canon and is finely sliced. Its translucent gelatinous circles are laid on the plate like the Olympic Rings. It comes in a vinaigrette puddle of sorts with the sheen of hot oil, only the green on chopped coriander stalks break up the various shades of rust. It’s refinement on a plate.

Peanut lotus crisps £2.50 are crispy and get a thorough dunking in watermelon syrup before it’s patted into crushed peanuts and chilli – they look like highly pollenated flowers. If they did pub snacks in Taiwan you’re looking at them right here.

Cuttlefish toast £5 were 5mm thick planks of white bread with a mix charcoal coloured cuttlefish and prawns on top. It was the colour of compost but was a triumph of umami and fishiness. Dip them into the cod’s roe for maximum ocean hit. They’re a great choice.

Taro dumplings can come in sweet potato and miso £5.25 or with Taiwanese sausage £5.50. We opt for the latter, and what we got were crisp based fudgy dough’d loveliness in a puddle of absinth coloured “low choi chilli dressing”. This food revs me up and puts me where I want to be.

More dumpling action came in the hand-pleated ‘xian bing” £6 stuffed with luscious minced pork with fragrant herbs. They were much more substantial than the taro versions with a rougher, crisper shell.

Crisply fried chicken wings £3 topped with caviar were actually the wing and not the drum with them came a sweet, sticky, savoury “sanbei glaze”. They’re brilliant and one of the main draws from the small plates.

Beef pancakes £10 was a masterstroke of slow cookery of short rib in a variety of Taiwanese aromatics until the proteins break down into fibrous strips. They’re piled high on a hollow bone with globules of bone marrow and pickled vegetables – wrap a la Peking duck for the full effect.

Iberico pork £18.50 was the collar of the animal that gets a good lavishing of char siu aromatics and is roasted to a sticky divine swine. We slice and gorge with the sesame peppered braised cucumber hearts that were all about scorch and crunch. My only complaint was that you’ll only get £1.50 change from a score, for half the money I could get twice the amount in Chinatown and feel arguably more satisfied.

From the sides we order “lardo lard onion rice” £3.50 where the rice is cooked in lard then it’s topped translucent pig fat and sticky fried onions.

Seasonal greens £5.50 with confit garlic are three jade green leafy stems of kai lan that are glossy from the shoaxing wine they’re cooked in. We can’t help feeling hard-done-by though with the portion size – give us more please!

Cast iron black pepper beef £15 is 40 day aged ribeye that comes with a dark, assertive glossy sauce that tastes of slow simmered sticky reduction that does exactly what it promises. There’s fried egg in there that demands to be mixed in.

Bamboo chilli beef fat rice chi shiang rice wrapped in a bamboo leaf with coriander and aged beef fat. It’s a meaty tasting in abundance and if I had a whole bowl full you’d find me snoozing on the nearest lay-Z-boy.

We all point fingers at the ma lai cake when we saw it on the menu – it’s an airy steamed brown sugar sponge cake that speaks loudly of caramel-toffee flavours – and if that’s not enough for you then there’s condensed milk & orange butterscotch for extra indulgence.

Almond ice cream £4.50 with black sesame sauce is served in a mini martini glass for extra effect – we demolish is in 10 seconds flat.

When did I go? Nov 2017
The damage: Expect to pay £55-65 per head with drinks
The good: There are lots of things that work here and finishable, in fact we didn’t leave anything behind. Stand-out things to eat are the cask iron black pepper beef and crispy chicken wings.
The bad: Some things don’t give value – but don’t come here for that, but a good Taiwanese feed with Cantonese sensibilities.
Rating: 4/5
Would I go again? Yes
Address: 30 Rupert St, West End, London W1D 6DL
Web: https://xulondon.com