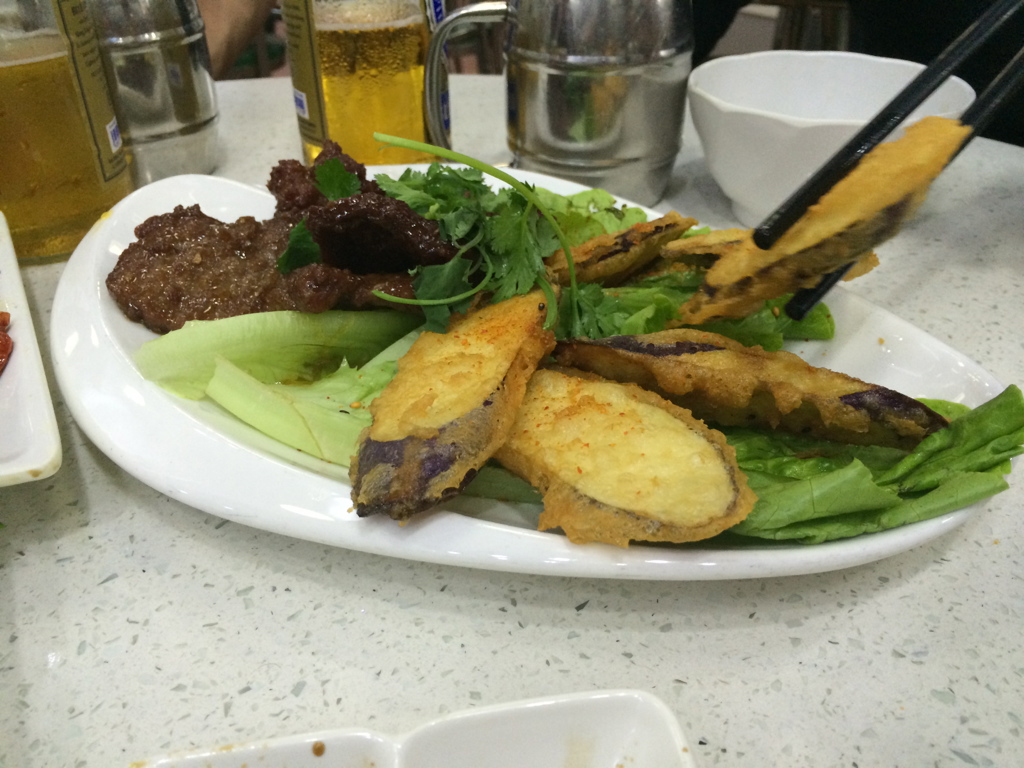 After an average start at Good Hope Noodle we decided to continue the prowl for midnight munchies in the local area and stumbled across Dafeng Macau Tsui Court Restaurant (大豐澳門翠苑餐廳) at around 2am local time. Oh and this is after having a skinful of Old Fashion’s at the Peninsula as you do. The place is a Hong Kong, Portuguese mash-up and as the name suggests and is open 24hrs a day serving up the local favourites such as pork chop rolls, fried eggs with ham and sliced white bread along with some wok-fired local dishes. The concentration is deeper than normal as everything is written in Chinese as you can tell from the faces. The pictures on the walls did wonders to guide us through the order though and the old dear who waited on us loved the challenge of serving a bunch of Westerners! Copius amounts of this refreshing lager was the right of passage. They went down so smoothly. 3am and we weren’t alone. Salt and pepper squid. Crispy and molten hot, paired with the beer it was perfect. It tasted fresh too unlike some of the frozen stuff you get in London restaurants. That’s not a dig by the way but the truth! Garlic spinach with plenty of wok-hei. You can’t go wrong with this simple yet perfectly cooked plate of green iron. Popeye would be hench after eating this. Steak with deep fried battered aubergine. The aubergine was lovely but the beef required a proper set of muscular jaws to get through. The steamed fish was demolished even before I could take a picture. It was fresh from the tank apparently and it tasted like it. Steamed and seasoned with ginger, soy and spring onions. It’s the best way to cook the fresh stuff. The Portuguese Macau influence is coming in here with the pork chop roll and it was a mighty thing, succulent, seasoned pork sandwiched with a sweet crusty carb. Heaven. This is that peanut butter and condensed milk roll that we kept ordering for dessert. We all had our doubts and even the peanut butter hater ended up being a lover of this marvellous creation. When did I go? November 2014
The damage: Expect to pay $60-$200 HK (£6-£15) per head with lots of beer
The good: At 3am needing something cheap with copious amounts of ice cold beer, no thrills, but simply delicious this place has it all. That pork chop roll and that crusty bread with peanut butter/condensed milk is what my soul craves when inebriated now. Not a bad thing at all and what nice introduction to an interpretation of Macau/Hong Kong comfort food.
The bad: Don’t come here expecting silver service or a hygienic toilet.
Rating: 3/5
Would I go again? Yes
Address: G/F, 207-207A Fa Yuen Street, Prince Edward, Hong Kong
Phone: +852 23818188