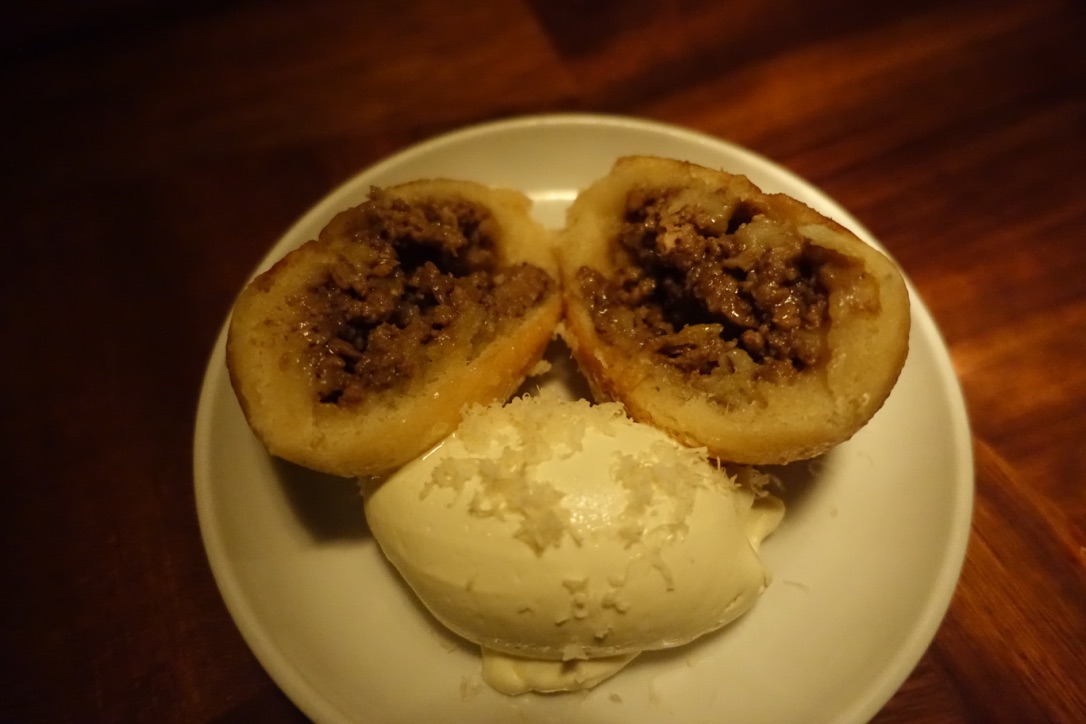 The Marksman in Hackney was launched in May of 2015 by two veterans in the game, Tom Harris and Jon Rotheram – both former chefs of St John. Before teaming up at the Marksman, Harris ran One Leicester Street (now defunct), while Jon Rotheram was the executive chef at Jamie Oliver’s Fifteen. The refurbished boozer has all of the positive qualities of a great pub; homely surroundings, great British food, with wines of the world, and an array ales. The simplicity of the menu is the selling point. Quinta De Fao Mateus from Portugal £37. It’s full bodied and very sweet. Probably too rich for me, it’s all subjective of course but if you prefer them less punchy, then go for something else. This starter was on the specials – ‘crumbed puff ball mushroom, sous vide egg, Tamworth cured pork shoulder’ – this was the description we received from our waiter and it was pretty apt! The crumb was as crisp as you like, probably panko, with wonderful slithers of savoury cured ham draped on the top. It was so good that it could rub shoulders with the finest Jamón Ibérico. Beef & Barley bun, horseradish £5. The pert little bun had a chew, and sweetness similar to a Chinese bao, I mean that in the best possible way. What you get is an intensely beefy mince that is stewed down with barley, which loves to be slathered by the horseradish cream it comes with. Cheese fritters £3.20 – crisp on the outside and fluffy on the inside – they were snatched from the plate and inhaled very quickly. Treacle cured Tamworth belly, green onion and beer mustard £15. The flavour in the tender pork was stunning and it was easily the best of the mains. I’d order this again in a heartbeat. Fried potatoes, burnt onion mayo £4. Mandolin slithers of potatoes, neatly layered on top of each other, cut into soldiers, then deep fried, until a the edges become craggy and golden. It’s the type of thing you’d eaten to brighten up your day and walk away very happy. Chicken and girolle pie £34. The chicken filling had a nice flavour as did the bronze pastry, but it was underwhelming. A touch more salt, and a bit more cooking to thicken the filling wouldn’t have hurt, but it was consumed nonetheless. When did I go? Sept 2016
The damage: Expect to pay £60-£70 per head with drinks.
The good: The food here, I gather is meant to be simple, pure and nourishing. It was a delicious experience with precise cooking you’d find in white table clothed establishments. The beef & barley bun is a compulsory order as are the fried potatoes.
The bad: The pie albeit good was underwhelming in comparison to the other dishes.
Rating: 3.5/5
Would I go again? Yes
Address: 254 Hackney Rd, London E2 7SJ
020 7739 7393