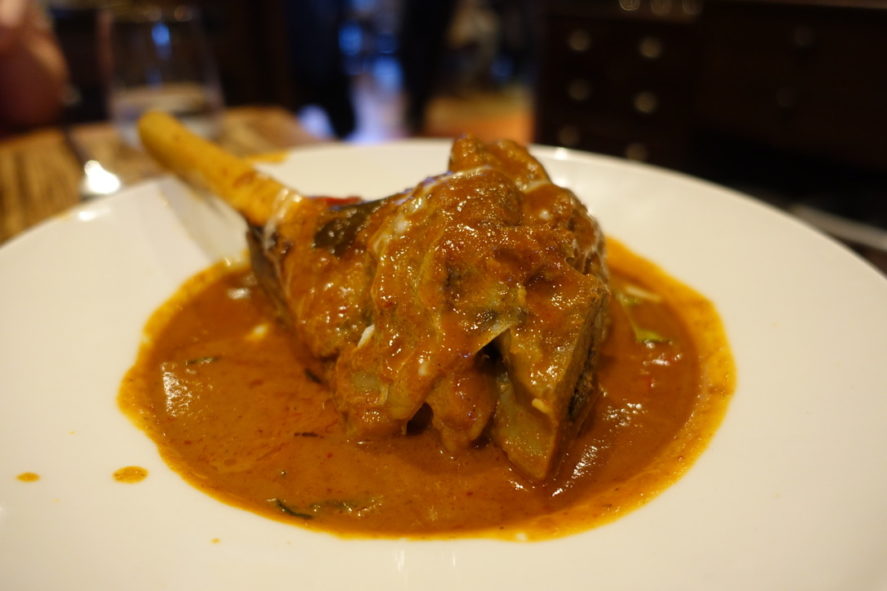 Esher is a quaint, yet well-off county of Surrey, located on the on the River Mole. It’s a pretty little place full of charm, historically steeped from the bygone days of being a coaching town on the London to Portsmouth route, it’s been a moneyed area since the 16th century when Henry VIII commandeered the district as a hunting ground. Most of you may know it for Sandown Racecourse or golf courses if that’s your thing – I think it’s a much loved commuter town judging by the heft of the property prices. One day I keep telling myself. Ok, so it’s not Britain’s most-talked-about foodie destination, but you will get a haven of unspoilt, rural countryside, some decent pubs, local independents and a handful of places to eat. I came to explore.

Inside it’s all about patterned tiles, carved wood furnishings and cheery Thai staff.

One thing I noticed straight away was how ludicrously long the menu was, twelve pages I counted and had to summon the advice of our waitress to help me navigate.

Our host was kind enough to move us away from the draft of the door to the back of the restaurant overlooking the rear terrace.

First came the “pu nim kratiem” £8.95. A singular soft shell crab fried until it’s battered shell turns an umber-shade of golden – and yes it was crispy as were the garlicky bits on top. There was a drizzle of viscous, sticky, soy based garlic-pepper sauce and prettily carved carrot discs. Good soft-shell crab resonates with me and makes me feel giddy at the best of times when done well, I could do serious of damage to a lot of these ones.

Pad Thai with prawns £9.95 is a decent version of itself. The chef here knows how to cook their pad Thai for sure. What we got was a smoky wok seared tangle of noodles, pert prawns, beansprouts gave their crunch and a web of egg gave the dish some visual drama.

The florets of broccoli and asparagus tips with their shaved stems £7.50 shouldn’t be overlooked either. They had crunch to their core and everything is better with oyster sauce with a good punch of chilli and garlic.

Lamb shank panang curry £12.95 garners your attention with a viscous rust coloured sauce, with a full-on, liberal kiss of Thai aromatics. What made the dish more intense was the cooking of the lamb on the bone, the flesh just fell off it as it should. But ask for it less sweet, so the palm sugar is tuned down – but then lot of Western Thai food works this way, it was even more pungent the next day.

There’s something so satisfying about fudgey sticky rice £3.50, hot from the plastic wrap that stops it sticking to things. It’s the best for dredging in sauces.

When did I go? June 2018
The damage: Expect to pay £25/35 per head with drinks
The good: Siam Gallery proves that there is a lot of excitement to be had with regional Thai fare. That would be the region of Surrey – British Thai food done well. Order what we had and you’ll be laughing.
The bad: My only gripe is that the lamb shank panang curry started to cloy after two mouthfuls, and you could argue that the price for the crab and pad thai were rather punchy.
Rating: 3.5/5
Would I go again? Why not…
Address: 95-97 High St, Esher KT10 9QE
Web: http://siamfoodgallery.co.uk