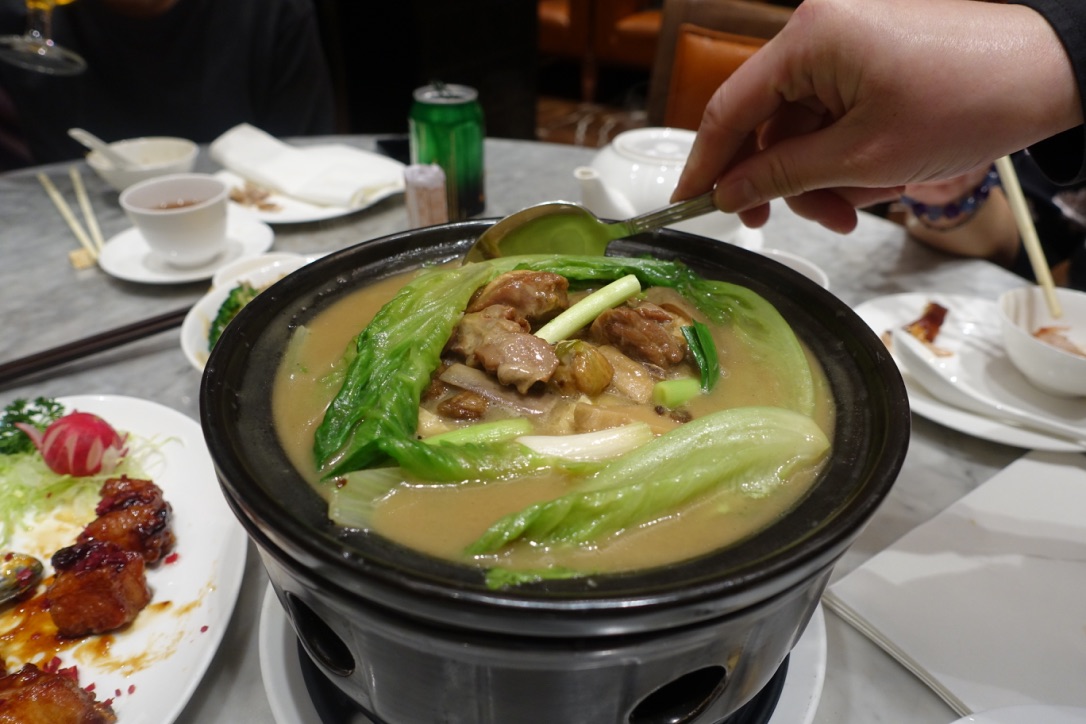 Yung Kee started off as a humble dai pai dong 1938 and sold enough roast meat to have it’s own restaurant from 1942. The premises were destroyed by a Japanese air raid in World War II before they reopened on Wellington Street in Central have been there ever since. They are one of the leading authorities for roast goose and were even awarded a Michelin Star in 2009 for it. With it’s marble topped tables, stone flooring and oak wood panelling, it looks posh here. Service wise, our waitress was friendly, possibly too much with her recommendations as we ended up with some stuff which was a bit meh. When we got here during the week at around 8pm, they had sold out of goose, bar a quarter portion! We had to have it, even at $200 which was a fair wallop for a teeny plate. Considering it was the last and perhaps not the freshest, it still made an impact. The crispy charcoal fat rendered skin was sublime as was the unctuous meat. Dipped into the sweet plum sauce it came with, made it so mouth watering. Those little sweet soy beans were lit with flavour too. Sliced marinated pigs trotter $200 was recommended by the waitress, which came with a garnish of crunchy jelly fish which was to tastiest thing on the plate. The rest was just insipid, gelatinous and generally forgettable. Sautéed broccoli with black seaweed topped with conpoy (dried scallop) $220 was a subtle affair, but things don’t have to smack you in the face to be good. (I know). Sadly, this one just wasn’t striking and probably wouldn’t be ordered again. The black seaweed creeping out. Sweet and sour pork was good and probably better than what you can get in your local takeaway. When did I go? Nov 2016
The damage: Expect to pay $500+ per head (£50ish)
The good: In spite of Yung Kee’s reputation, it was a boom and bust type of a meal. Probably more of the latter than the former. The roast goose, I’d come back for and I’d probably do so much earlier to catch the oven fresh stuff.
The bad: Sadly, the story went a bit off script, the ending was supposed to a “happily ever after” but we ended up paying premium prices for a meal with very little shining moments. There were no walks into the sunset.
Rating: 3/5
Would I go again? Maybe
Address: Central, 32-40 Wellington St, Central, Hong Kong
Phone: +852 2522 1624