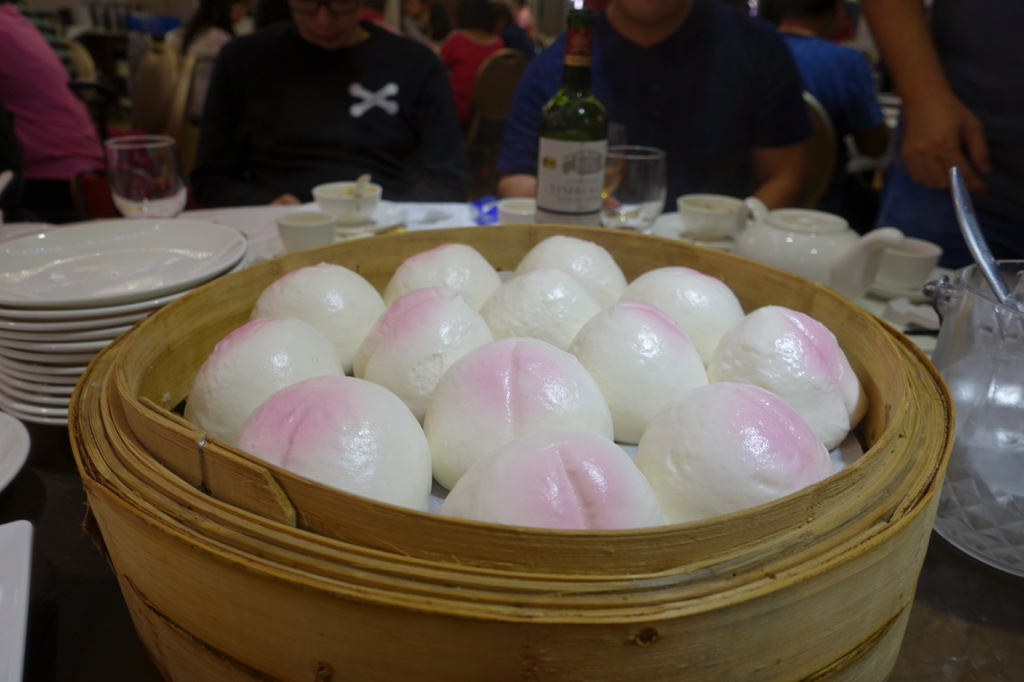 Foo Lum Fisherman’s Wharf Restaurant (2001) is a Hong Kong franchise that has been around since 1992 and their vast multi-floor restaurants represent everything that you could want in classic Cantonese cooking. A group of 20 or so of us found how good it was one November evening in 2014.

The set dinner was the way the restaurant suggested we go, due to our group size, and we kicked off the proceedings with a roast goose. It came with golden-lacquered fatty skin with deep savoury flavours, we paired it with the plum sauce it came with. The richness of the goose worked so well with the light sweetness of the sauce. Gullible westerners are easily tricked as our plucky white boy was unfortunate enough to be duped in believing eating the goose head was part of an ancient tradition that would give him luck. Of course he obliged but my conscience told him to stop before he was actually going to gorge on it. Next up some char-siu pork, you really can’t have too much of a good thing and this is no exception. I could easily fuel my body on this for days. I am yet to have bad char-siu in Hong Kong. Pigeon marinated with five-spice, star anise and deep fried until golden. That golden-brown lacquered skin seems to be a theme, a very good delicious one. A melange of mushrooms, be it wood ear, chestnut or straw, stir fried in a flaming wok with oyster sauce and served on a bed of tender baby corn & choi-sum. There is also token fish maw there soaking up all of the juices. They are swim bladders from fish, but don’t let that put you off as they are delicious. Pork spare ribs cubed, battered, fried and tossed in sweet & sour sauce. It’s your local takeaway go-to, but it originates from Hong Kong and it’s authentic here so it must be better than your local, obviously. Pak choi with goji berries and what looks like a pool of soup broth. These bland crunchy vegetables need all the help they can get to make them any bit as interesting as the other dishes.

Hello again golden brown lacquered skin. This time it’s on a chicken and not the pumped up versions you get in the UK, they are of a smaller in size here with more of a chew and are way deeper in flavour.

Steamed fish, so fresh they were in the restaurant’s tanks moments ago. It looks like a red grouper but can’t be sure, all I know is that it’s sweet flesh seasoned with soy, spring onion and molten oil from the wok was devoured within minutes. Since we were still in the spirit of celebrating my birthday the kitchen brought along some Chinese birthday cakes for desert. They resemble a peach meaning longevity in these parts. They seemed to have too much time in the steamer though as they dough was dry and sponge like. The filling of sweet lotus paste and preserved egg yolk was ok though. On the topic of desert here we have jelly of osmanthus flower and goji berries. It seems that flowers in food is practiced all over the world not just by hipster chefs’ in London. When did I go? November 2014
The damage: Expect to pay $250-¥500 (£25-£50) per head BYO is ok too
The good: Some hits and infrequent misses, but overall for the price and quality ingredients it’s hard to go wrong. I hear Hong Kong is full of these huge dining halls and it can be mind-boggling to pick which one, hopefully you’ll be tempted enough to visit this one for no thrills authentic food.
The bad: The birthday cakes sucked, the rest was good stuff.
Rating: 3.5/5
Would I go again? Yes
Address: 2/F, Cheung Sha Wan Plaza, 833 Cheung Sha Wan Road, Lai Chi Kok, Hong Kong
Phone: +852 23108880