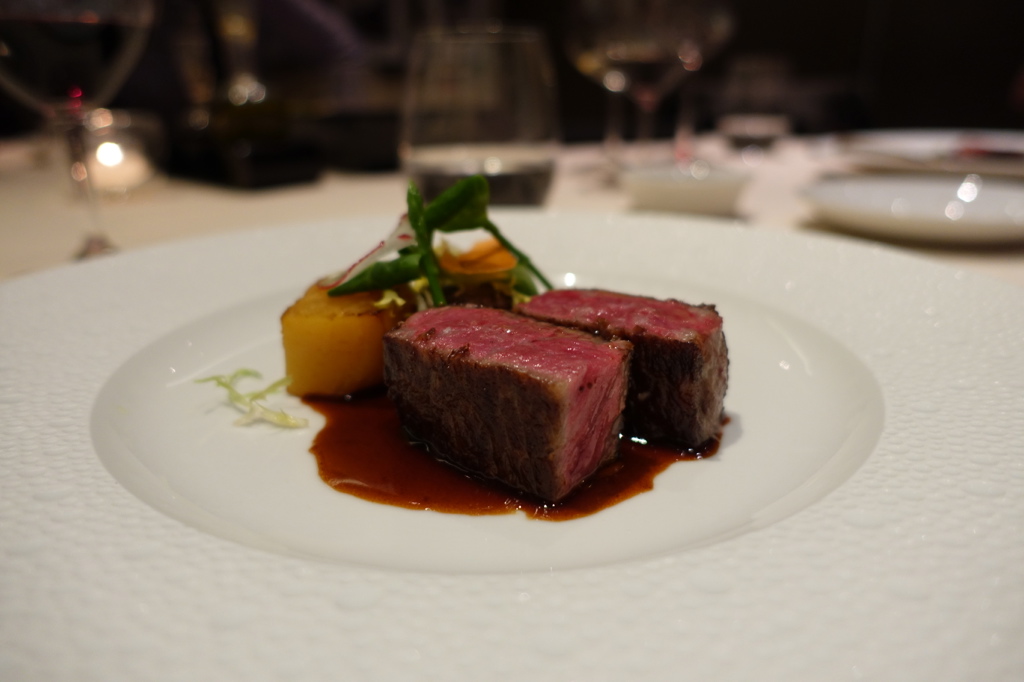 As you can see from the title of this review, 8½ Otto e Mezzo Bombana is the only Italian restaurant outside of Italy to have received 3 Michelin stars, they were awarded in 2012 just 2 years after opening. Head chef Umberto Bombana was trained by Ezio Santin, and worked at Toscana in the Ritz-Carlton Hong Kong from 1993. Umberto with his big time truffle peddler credentials helped put white truffle onto Hong Kong’s restaurant map, and since 2006, he has been Piedmontese Regional Enoteca Cavour’s International White Truffle Ambassador. The name 8½ was inspired by Bombana’s favorite Italian film director Federico Fellini’s 1963 autobiographical movie 8½.

You can imagine that a restaurant of this calibre is refined and deserves respect. However, myself and four other companions rocked-up 2 hours late, with one of our group on time towing the line, alone, in the room that was booked for us. Long story short due to the Umbrella Movement at the time, many of the roads were barricaded off leaving limited access to for the taxis. So we were dropped off as close as possible. We relied on Google maps to do the rest, but the map pin decided to do a little dance and take us to an army barracks and everywhere else in the rain but the restaurant, which was only yards away! We held our heads in shame upon arrival and were greeted with a stinking welcome unsurprisingly!

A fine example of a pensive bald man contemplating how good life is. The veal amuse bouche was tender enough to dissolve on your tongue without any jaw effort – we’re off to a good start. The dish entitled “roast octopus and roast artichoke, greens and lemon oregano dressing” $240 HK were tender octopus discs that came with a wisp of smoke from chargrilling and earthy artichokes. An acidic push from the lemon edged things into place. There’s not a lot not to like about this dish apart from the amuse bouche size, it was teeny which made made us want for more. Seared red tuna, fennel pollen, tomato and citrus emulsion, Calvisius Elite Cavier $380 HK. I had food envy like you wouldn’t believe with this one. It looked like a marvel with matching flavours. Onto the mains I opted for the buttered parmesan linguini with white truffle. The pasta was delicate in flavour even when it became one with the sauce, which meant the permeating sweet pong of the truffles took centre stage. I can imagine that if this was the game plan, it made perfect sense. Limoncello soufflé, lemon jelly and crumble, mandarin orange sorbet. I was totally enchanted by this absolute queen of soufflés. It was a total blast to eat and was one of the striking moments of the meal. We moved onto the cocktail lounge after dinner to settle the evening with a mighty fine Macallan 12 Old Fashioned paired with some petit fours. When did I go? November 2014
The damage: Expect to pay ¥2000-¥2500 (£195-£250) per head
The good: The goodness comes in blasts here, the refined Italian cookery is classy stuff. The service was top notch too as our front of house knew everything about the food, and it’s a place that isn’t shy about giving you exuberance in spades. I would suggest coming here if you have deep pockets as the white truffles are a must as is the limoncello soufflé.
The bad: Despite being 3 star Michelin rated restaurant it didn’t blow me away. It was good but not great for what I’ve experienced before.
Rating: 3.5/5
Would I go again? Yes
Address: Shop 202, Landmark Alexandra, 18 Chater Road, Central, Hong Kong.
Phone: +852 25378895
http://www.ottoemezzobombana.com/hong-kong/