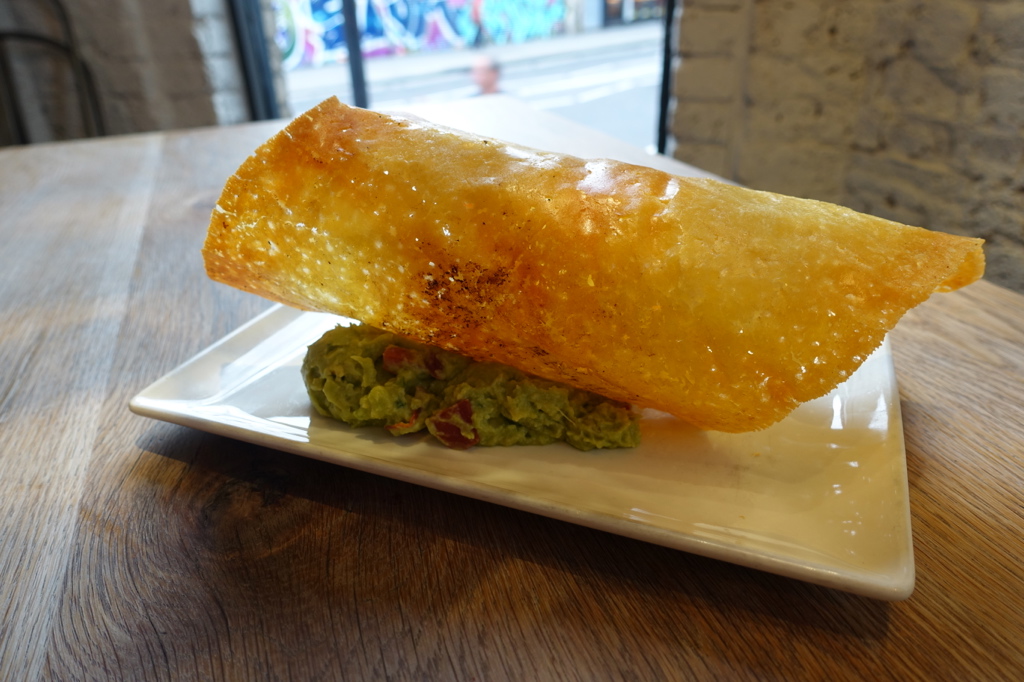 The two floor, 130 seater Lupita East has been around since October 2012 and is based on Commercial St of Spitalfields where a lot of great eating can be had. It’s the second instalment from the Lupita group. Lupita has been around for half a century now as a ‘taquería’ (translates as taco shop) on the west side of Mexico City before opening their first restaurant in 2010 on Villiers Street. I had no idea about this place prior to my visit and just so happened to be passing by feeling really rather peckish. The interior is spacious and looks like it can handle big groups. It lakes the intimacy for dates though on the top floor, which I’d assume the dimly lit ground floor would handy for. A staff member was watching the football when I wondered down for a loo break on a huge wall mounted screen. The menu looks friendly and our waitress was happy to explain on how to approach it. Chicharron de Queso y Guacamole – ‘Crispy rolled cheese served with fresh guacamole. A Lupita delicacy and fun for sharing!’. Visually there wasn’t  much to dislike about a perfect cylinder of caramelised cheese resting on the little mound of guacamole. And they’re right, fun it is to eat, tearing the oily cheese to scoop guacamole is pure gratification. The pork is my calling. Salsa is rudimental in Mexican food but does so much to lift flavour. ‘Pastor Pork. A delicious mix of pork escalope and bacon marinated in a blend of chillies, herbs and fruits. Cooked on a rotating pin and served with onion, grilled pineapple and coriander’ (£6.95). The description is mouth-watering but in reality it turned out to be uninspiring to eat as the flavour just wasn’t there. Our waitress gave me a pre-warning that the salsa molcajeteada was hot, but it was mild and barely enhanced the taco. The enthusiastic waitress was lovely and recommended (convincingly) that the traditional Tres Leches desert was the way to go. The actual cake is moistened by the cold milk which actually taste like the left over milk from a bowl of Frosties. Granted deserts are supposed to be sweet but this one made an instant attack on my molars! I’m glad I tried it but it’s safe to say that it won’t be my go to desert. When did I go? July 2016
The damage: Expect to pay £30-£40 per head with drinks
The good: The crispy rolled cheese (chicharron de Queso y Guacamole) was the only thing that stood out.
The bad: The quality all seemed a bit high street to me. For a similar price and much better experience I’d hit Molé Taco Bar. (A review will follow – stay tuned!).
Rating: 2/5
http://www.lupita.co.uk/
60-62 Commercial Street, Spitalfields, London E1 6LT.