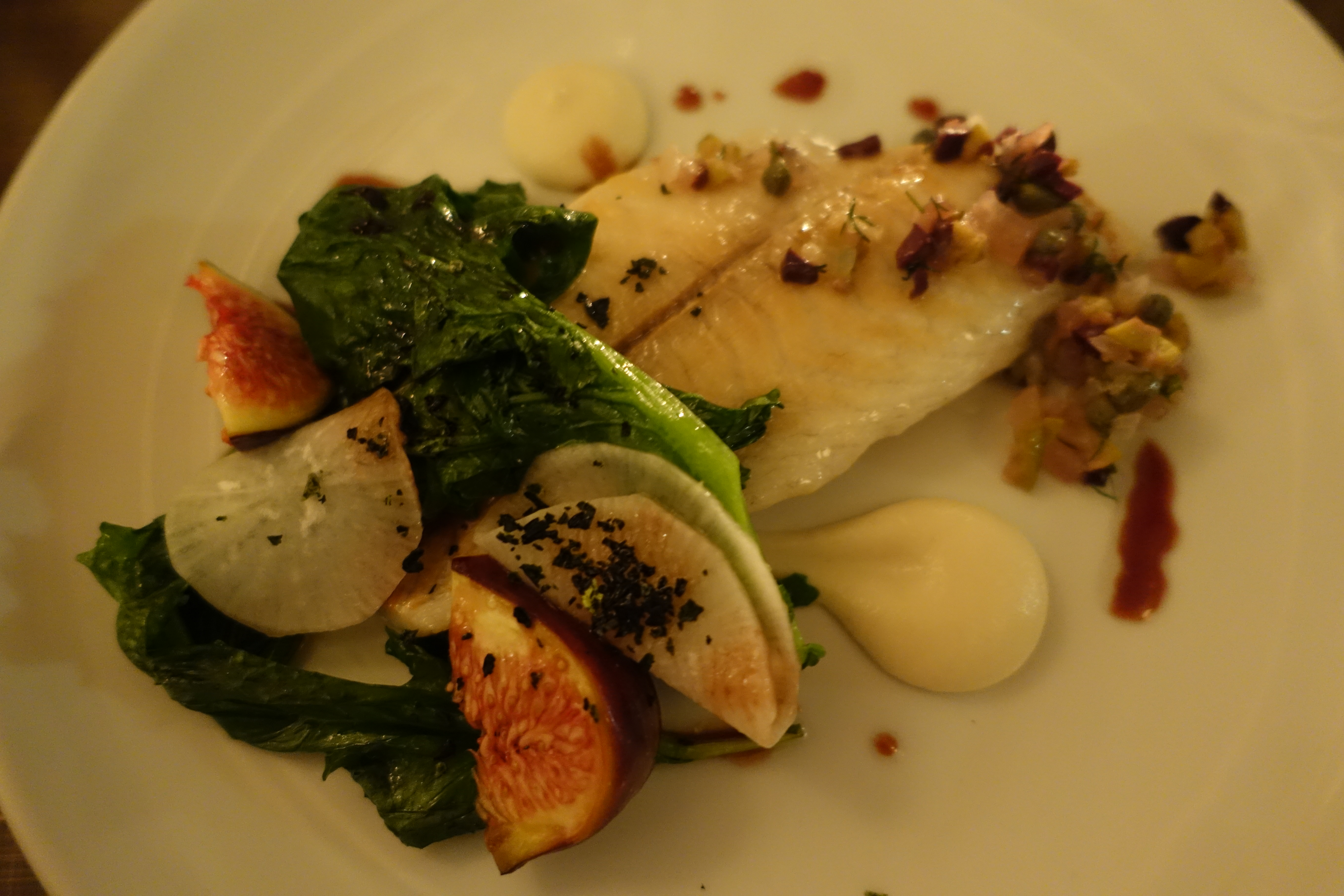 Picture opened in June 2013 by trio Tom Slegg, Colin Kelly and Alan Christie, all formally of Wild Honey and Michelin starred Arbutus which I’ve had many a fond memory in. The 3 chaps hatched a plan and decided to go it alone and with such great reputations from their previous ventures why not? Chefs Alan and Colin run the kitchen with Tom taking care of the front of house action. Aesthetically, the restaurant is long with a minimal non white table cloth set-up, matching hard chairs and a glazed ceiling – great for vitamin D as well as lighting up an otherwise plain Jane room. Counter dining by the bar is available too: The concept isn’t entirely original, but it just works with the small plate format – focussing on ever-changing ingredients around British seasonality – if one word pops into my head right now it would be cliché! Diners can craft their courses via a selection of vegetable, fish or meat plates. Since we’re the sort that wants to try everything opting for the £39 set meal was a must, at this value, we couldn’t argue. Sour dough rolls and whipped butter were ok, but I was expecting their much revered crusty baguettes that everyone raved on about. First impressions didn’t create fireworks unfortunately. Rittenhouse Rye with house ginger beer (£8.50) came with subtle ginger heat which compliment the rye nicely and took the edge of the week! Beef bites £1(each) were highlights; slow cooked well seasoned melt in your mouth beef with a crispy fried exterior. It came with a dollop of sriracha-esque chilli sauce which was a delight. Gordal olives were juicy and pleasant but at £4 for a tiny plate we felt robbed. Autumn vegetable valouté was beautifully balanced, tasted of those earthy root vegetables and the peppery green oil was a nice addition. Washed down with a Wairu River Sauvignon Blanc 2013 (£40) with all it’s tropical fruit flavours you can’t go wrong. Roast butternut squash, quinoa, aubergine and yogurt. This was a jumping on the British tour bus with a sprinkling of North Africa. Pleasant enough with the cumin flavour but it didn’t have any stand out qualities. Lightly smoked pork cheek, quince, red onion and endive. I felt excited when pork cheek featured on the menu and couldn’t wait to taste it. It told a different story when eaten though; the meat was quite dry and unforgiving but for the sweet apple with chards of crackling pieces and red onion jam it would have been a challenge to eat on its own. Paired with a Montepulciano Crociani (£45) which was a medium bodied fruity number – an excellent choice. Grilled sea bream, cauliflower purée, fig, white turnip. The fish was buttery and cooked so well and the favour was complimented further by chopped onions, olives and little capers. But for the quantity here you would generally think the olives would over power the fish which was exceptional quality. The turnip tops and slightly pickled daikon were worthwhile additions so was the fig, even though a tad random – a delicious assembly of food overall. Daphne’s venison, red cabbage, parsnips, oat crumb. I can imagine the venison is sourced with love and our excellent waitress informs us that it’s from the neck of the animal. It’s cooked to a spoon eating tenderness but perhaps lacking a richness sauce to bring the dish together and to hydrate the venison. The red cabbage needed an extra vinegar sharpness to lift the dish as it was rather sweet. Chateau Gachon Montage (£36) from Saint Emilion became a worthwhile companion to the venison. Chocolate mousse, Tulameen raspberries, oatmeal biscuit. The mousse lacked richness and raspberries weren’t the juiciest or the sweetest, perhaps they were coming out of season? We did attend mid October after all! The oatmeal gave a clever textual element though but the overall desert was an anti climax. The damage: Expect to pay £80-£90 per head
The good: A fellow diner commented that the service and atmosphere was really good as was the value for money, but the food was just ‘nice’ and would go back for a meal with his mother or auntie. I’m inclined to agree too with some interesting plates and solid cooking.  It’s great to see that the chaps have followed the Arbutus ethos of having so many excellent wines available by the glass or carafe.
The bad: The hit and miss set meal just meant the evening was a box-ticking exercise, not a stand out experience for the food memory, pleasant enough but not sublime. For half the price I could eat in my beloved Mayflower or for the same value Barrafina Drury Lane, I know where I’d rather be.
Rating: 2.5/5
Address: 110 Great Portland Street, W1W 6PQ.
Phone: 020 7637 7892