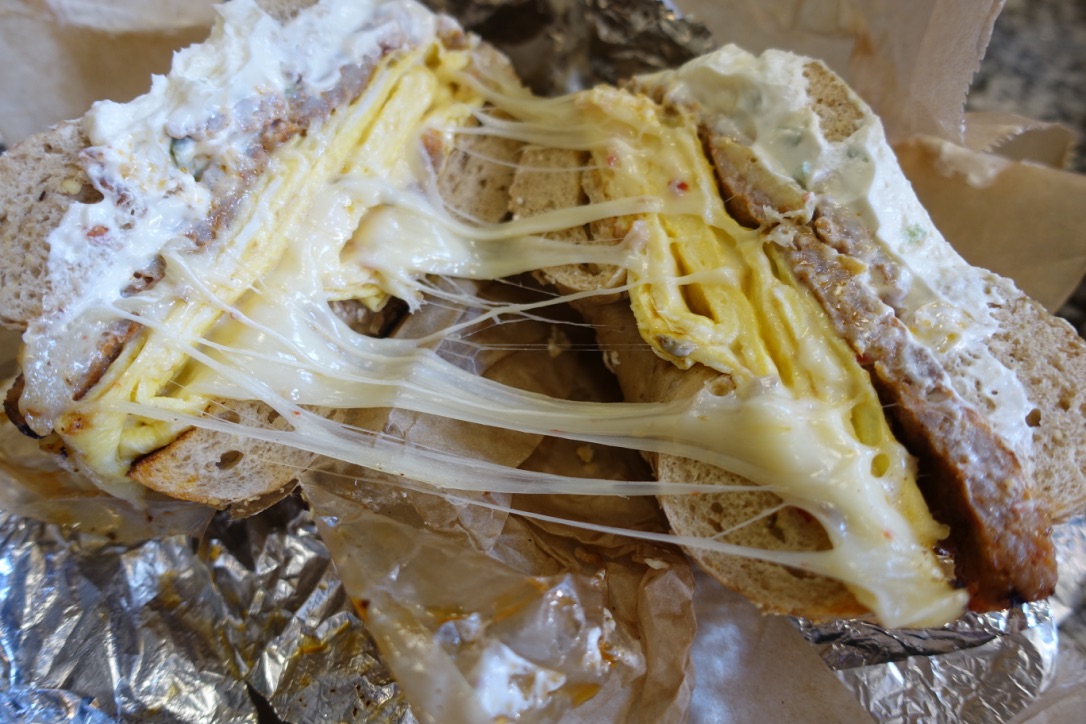 H&H Bagels started in 1972 when Puerto Rican Helmer Toro and his brother-in-law Hector Hernandez (thus the name “H&H”) bought Midtown Bagels at Broadway and 80th Street for a mere $5,000! That’s $29,000 in 2018 dollar terms. In spite of the gargantuan amount of chewy carb rings they produce for the City, I’d say that’s a flipping bargain. Coming here was our last meal of the excursion, so we needed some belly filling nourishment to offset airplane dinners which are mostly devoid of happy moments. It’s not just the bagel production which is gargantuan – the queues were too. We simply couldn’t leave NYC without having one though, even if we had to shoe-horn one in as were were already filled to the brim from our holiday. First up we had a “whole wheat everything pumpernickel” bagel filled with sable fish and cream cheese $12.95. The bagel itself was packed full of seeds and came with a lick of aniseed from the fennel. The rich oily fish came over-flowing with cream cheese, it so exuberant, only a couple of mouthfuls did the trick. I left the rest. Next up we had silky Nova Scotia salmon $10.95 on a malty brown bagel – again they weren’t holding back on the cream cheese! My favourite was the one from the speciality section of the menu, which came with 2 eggs, hot Italian sausage, pepper jack cheese and jalapeño cream cheese on a whole wheat bagel $8.75. It was filthy in every way imaginable, this was obviously a good thing. The cream cheese, which I’ll make a point of, could have been toned down a few notches, a smear would have been enough. When did I go? Nov 2016
The damage: Expect to pay $10-$13ish for a bagel – double that if you have a couple to yourself, we did and it really wasn’t necessary.
The good: The bagels are all snap and chew in every bite. There’s a choice of fillings to cater for the masses and bagel varieties in that vein. It’s great for grab-go only, but there are a number of tables available in case you’re on your way to JFK like us.
The bad: The generous slathers of cream cheese drowned out a lot of the other elements of the bagel. I’d suggest asking them to take to easy, unless its your thing!
Rating: 3/5
Would I go again? Yes
Address: 1551 2nd Ave, New York, NY 10028, USA
Phone: +1 212.734.7441
https://www.hhmidtownbagelseast.com