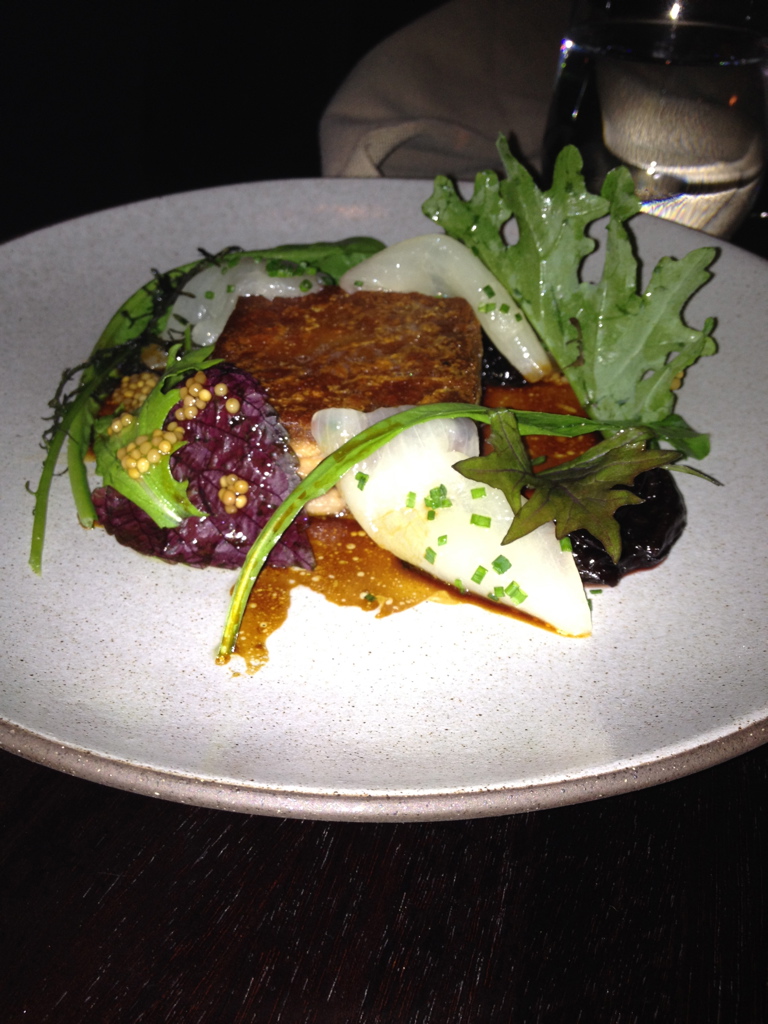 The NoMad Hotel opens in 2012 in Midtown New York and comes with 168 rooms in its 20th century Beaux-Arts building which was once occupied by offices. But I’m not here to stay, but to eat that one chicken dish in their plush dining room that everyone keeps swooning about which is created by Three-Michelin-starred, Swiss-born chef Daniel Humm. Humm’s restaurant Eleven Madison Park has also just been voted to the number one spot on the World’s 50 Best Restaurant list. Before you feast you’re presented with a complimentary onion and caraway loaf – I am a sucker for good bread and this freshly baked piece of carb heaven does a little dance on the senses. The smell is so profound. We also go for the radicchio salad served with Granny Smith apples and mozzarella. Roast chicken for 2, foie gras, black truffle and brioche $79. The chicken comes from an Amish farm in Pennsylvania which is delivered to the restaurant with its head, claws and offal intact. Preparing the chicken such as beheading ensures that the skin stays intact. For the stuffing foie gras is cooked then pressed through a tamis, then it’s mixed with black truffles and brioche. The mixture is then piped beneath the skin. The result is a deep nut-brown sheen that is deeply flavoured with a rich roasted flavour like no other roast chicken I’ve had before. And that’s just the breast.. …Of course the dark meat for all you leg lovers out there rest assured, it’s not wasted – the meat is carved from the bone and is sautéed with butter, shallots and morel mushrooms with reduced chicken stock. It is a delicious thing. Suckling pig, confit with dried plus, onions and wild greens $35. For this pork belly to be so uniform and perfectly shaped it’s invariably pressed then slow cooked. The meat is tender and seasoned well as for that skin it’s as crispy as can be, it is divine swine. When did I go? March 2013
The damage: Expect to pay $70-$100 per head with drinks.
The good: The humble little chickens come from an Amish farm in Pennsylvania, are delivered whole and each one is butchered onsite to to ensure that every piece of skin remains intact before roasting – if that’s not passion then I don’t know what is. I’ve never known a restaurant to have a chicken breast as its show piece but there is enough impact with this foie and truffle infused one to excite any palate.
The bad: Ok, no kidding it’s a bloody expensive chicken. Try it before you knock it though.
Rating: 3.5/5
Would I go again? Yes
Address: 1170 Broadway & 78th Street, New York, NY 10001.
www.thenomadhotel.com