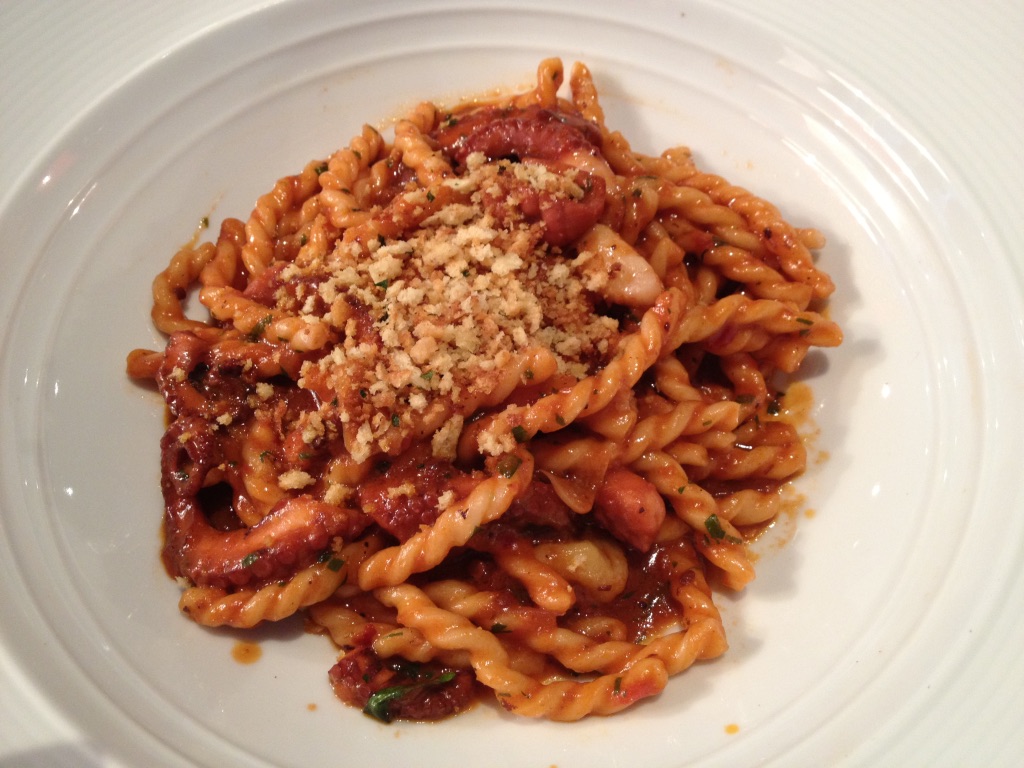 Chef Michael White, the owner of the Altamarea Group, a consortium restaurants made up with Marea, Ai Fiori, Vaucluse, Osteria Morini, Nicoletta, Costata and The Butterfly in New York, Osteria Morini and Due Mari in New Jersey along with Al Molo in Hong Kong. Well that was bloody hard getting them all in one breath! Before his career kicked off as a chef, he was a football player (American) – injury forced retirement and he found his feet again cooking. He trained for 7 years focussing on Italian cuisine, some of which were spent at Ristorante San Domenico in Imola, Italy, under the wing of chef Valentino Marcattilii. After seeing various videos of Bourdain and Zimmern wax lyrical about the hand-made fusilli with octopus and bone marrow at Marea I had to visit – I did just that multiple times. FUSILI durum wheat pasta, red wine braised octopus, bone marrow. The pièce de résistance and the reason I why I came here in the first place. It’s a harmonious thing to behold, red wine, garlic, herbs, slow braised octopus, bone marrow and fusilli all mingling together. The garlic and herb crumb added texture. It’s wonderful work and quite possibly one of the best pasta dishes I’ve had. The juice – it has to be red for the fusilli. Someone is very happy. Petit fours of chocolate, jelly and a mini meringue. What you see here is not only a cup of espresso but a lesson learnt by myself. The espresso is Italian by origin, but commonly found all over the world and is often drunk after a meal as a digestive. (You don’t need me to tell you that!). I was oblivious to this as I was a young whipper back in 2012, going through the infancy of my Italian coffee etiquette. As a result I requested a latte – the waiter immediately retorted, ‘of course espresso sir?’ I responded ‘no, a latte please?’. The response I received was – ‘ok sure sir I’ll bring your espresso’. In my confusion I blurted out ‘no bring me a latte and clean your ears out mate!’. My fellow diner interrupted insisted that the waiter brings over the espresso’s and informs me that asking for a traditional morning beverage such as a latte post lunch in an Italian restaurant is a cardinal sin!!! Oops. Uni, lardo and sea salt crostini – it was my first time having uni in this format and I can describe it as richly decadent along with a viscosity akin to thick custard. The intense iodine flavour death-grips your taste buds like you wouldn’t believe – perhaps the heat from the grill which melts the lardo accentuates the uni flavour even more. Either way I can safely say I didn’t go back for seconds – the flavour was way too intense for my palate. Polipo – grilled octopus, smoked potatoes, pickled red onion, radish, chilles, tonnato. The seared octopus is as tender as can be and that thick balsamic reduction works really well against the smoked potatoes. These little profiteroles were so good that I could have eaten them by the dozen, only because they were as light as air, but also the chocolate piped cream within was sublime. When did I go? June 2012, March 2013, May 2013
The damage: Expect to pay $52 for a 2 course lunch + more with drinks.
The good: You’ve gathered that the fusilli in my view is a thing to behold, it’s simply exquisite and a must have when you come here. There is matching service, even though staff are quick to offer you an expresso over a latte. Arrive dressed to impress too, as it’s that type of place that deserves it. I’d happily come back, but next time I’ll change up my order!
The bad: The uni, lardo, sea salt crostini was a punishment and only fit for the advanced palate. This is only a little quibble.
Rating: 4/5
Would I go again? Yes
Address: 240 Central Park South, New York, NY 10019
212 582 5100