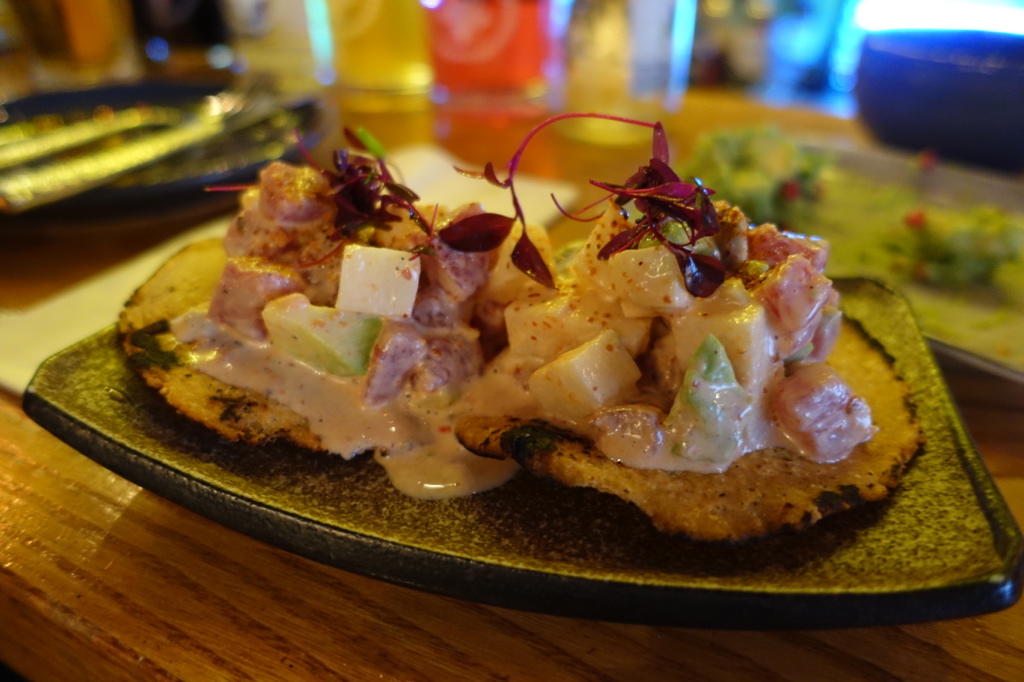 I was that enamoured by Molé Taco Bar during my July visit, it made me come back twice on my own steam with friends in tow. It’s rare that this happens especially in a dining diary which is full of new places to try to satisfy that culinary curiosity.  So I’d like to give a comparative view in this write-up and I hope it’s useful to you. And in case you’re wondering my first post can be seen here. Guacamole, lime, sea salt and pomegranate £5. Positively a must to order – happy scooping. Tuna Tostada – yellow fin tuna, avocado oil, chipotle mayo £8. It was just as delicious as the first time and what I love about this dish is the extra freshness that the cubes of jicama fruit brings. It has the same crunchy consistency as a Jerusalem artichoke but with the sweetness of an apple or pear. Soft shell crab tempura – serrano cream, pico de gallo £8. This one ended up being a let-down – I’ll explain. From my first visit the crab was whole, smaller but packing way more flavour and juice, it was everything a soft shell should be. This time the crab was larger, split in half and the flavour impact was missing. It was still good but it was a no contest affair. So bring back the smaller crab! Braised oxtail, blackberry, crema, tomatillo sauce, red amaranth £8. It definitely had that deep slow cooked meat flavour and it’s the taco that got me hooked at Taste London this summer. Awesome work. Cochinita Pibil – pulled pork, orange habanero, pickled onion, avocado £8. The acidity from both the onion and habanero did wonders to bring the taste buds alive with this one. Dulche di leche créme brülée £5. I had to get this again as the deep caramel flavour is irresistible. **Disclaimer – the richness WILL put you into a food coma**. One thing to note though and it has become a stickler as not only was it a novelty it also added lovely flavour – that chocolate skull was missing, apparently they had run out! Bring it back please. During a mid November evening I tow 8 burly humans to Molé Taco bar as it was the chosen venue to host a baby head for a good friend. It made sense as it’s good value, good food and a fun place. Pacifico beer £5 is sweet and crisp. Guacamole, lime, sea salt and pomegranate £5. Still delicious – it came at a room temperature this time vs the chilled variety which I’d preferred. It is the quintessential scooping fodder. Pork belly and green molé skewers £7. These were sold to us by our front of house so convincingly we had to order them. ‘They always come back as empty plates’. You don’t need say any more sir. They were tasty but to the extent that I’d order them again. Soft shell crab tempura – serrano cream, pico de gallo £8. There’s not a lot to not like about this wonderful taco except they were just more compelling with the whole crab. Bring it back! 15 hour braised chipotle short rib 350g £20 – this Flintstone sized rib is enough to send any human into the deepest food coma as the meat is so tender you can’t stop eating it. The pickled cabbage and grated sweet potato is a nice touch too. The flavour is on the subtle side so you can really taste the beefiness. However, it could do with some acidity and spice in my opinion to bring the dish alive. When did I go? Aug/Nov 2016
The damage: Expect to pay £40-£50 per head with drinks
The good: The food is still good here and the service is friendly enough to keep me coming back.
The bad: It’s the little details like the soft-shell crab they have become a stickler for me. If there is a return of the whole crab in a taco as well as the chocolate skull I’d be in a much happier place! The dulche di leche créme brülée had ran out by 8.30pm too. One more thing grumble about as during our 3rd visit we’d ordered 3 different portions of tacos between 2 people (1 each in different styles) but there was some miscommunication in that our front of house thought that we only wanted 1 taco from each style to share. How can we spilt 3 individual tacos between 3 burly humans? The problem as rectified soon enough though.
Rating: 3/5