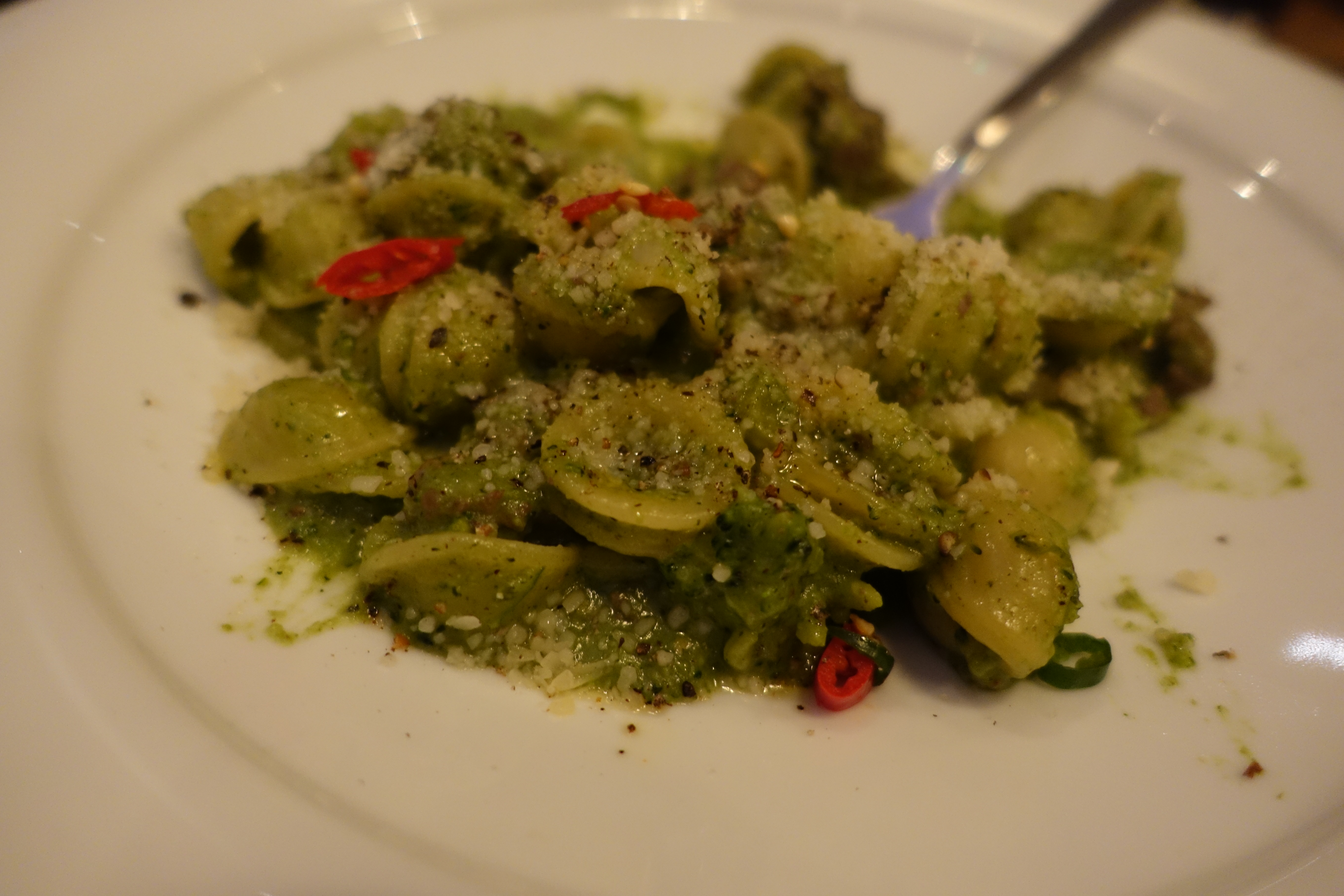 Barbaracca first opened on the 15th of September 2015, replacing the defunct fine dining favourite, La Luna which had been trading for 14 years, with the same owners as Barbaracca. The brief is to deliver childhood-Sicilian inspired dishes with locally sourced produce – what’s there not to like with this story? The style is laid back in a ‘rustic’ way as is the interior, laden with Ikea-esque tables and chairs, with pillars built entirely of wooden wine cases. The bar was constructed with them too. Owners Daniele Drago and Matt Wright who received special mentions in the Michelin guide for their work in the past, came up with the name ‘Barbaracca’ from the Italian word for shed, ‘racca’, which refers to a holiday beach hut. And the word father, ‘baba’, ties it to the family concept. Goldalming is totally outside of my usual hunting ground of zones 1-2 but when you’re visiting friends in the arse end of the earth you have to eat what the locals say is the best.

So from what I hear the building is historical, the menu looks fun as is the service as you’re greeted with big smiles. We’re off to a good start. Sicilian anti pasti platter £14 for two. It comes with marinated Sicilian olives, sundried tomato, duck prosciutto, chargrilled vegetables (peppers, potatoes, onions), some cheeses – soft & hard as well. Some pink coloured ham akin to the processed stuff you get in supermarkets, also features. The best thing on this plate were the sweet chargrilled vegetables, somehow everything else seemed unmemorable. Bread basket £1.95. All a tad on the dry and cold side, perhaps a bowl of warming balsamic olive oil would have solved this, with a quick blast in the oven. Nero D’Avola 250 ml £9. Not a bad glass of juice at all, I could taste some savoury notes. Calamari fritti £5.95. Insipid squid, soggy batter, served luke-warm. Calamari is so good when done right, but this is a case of when it’s done wrong unfortunately. Arancini £4.75. The exterior was nice and crisp, the interior carried some good risotto flavour too. There were some random peas and herbs in there, I reckon a few more of those would have given it an extra dimension. Pollo Ripieno E Caponata – roasted chicken thighs, stuffed with pork meat, Sicilian sweet & sour caponata £12.95. It’s those beautifully sweet vegetables that came with the anti pasti platter, making an appearance and quite rightly so, as they packed with so much flavour. The chicken needed it though, as it was cold and uninteresting in an overcooked dry way. Spagetti Con Ragú – Surrey beef & Shackleford pork bolognese £10.50. I had a mouthful of this one and it was enough to convince me that it lacked flavour. My perfect conception of a ragu is a slow cooked thick, hearty, comforting sauce jammed full of flavour. This sadly wasn’t any of the above. Oricchiette broccoli E Sassiza – Sicilian fennel sausage and broccoli ragú £11.75. I love oricchiette and broccoli, fennel sausage even more so. The dish arrived piping hot as you’d expect, but it was missing the flavour you’d want from a dish like this. The sausage was bland, missing the fennel intensity which I love and so was the broccoli ragu. I loved the concept of this dish but it failed to make an impact. After some pimping with parmesan, fresh cracked pepper and chilli oil it wasn’t enough, so fresh chilli’s were added for some redeeming value. Chocolate cheesecake £6.25. You’re getting in London territory with that price tag so you’d expect big things. But you know what, it wasn’t too shabby. It was crispy on the outside, dense in the middle and rich in chocolate flavour. Good overall, even with that aerosol whipped cream! Chocolate cannoli £5.75. Don’t they look pretty? It’s a shame about the flavour though as the filling tasted a bit pedestrian, and the pastry shell was a little stale. I reckon if some of that chocolate cheesecake was used instead then it would be a sure fire winner. When did I go? March 2016
The damage: Expect to pay £40 per head with drinks.
The good: The chocolate cheesecake divine, even with Mr Whippy. The omnipresent service was friendly and welcoming.